Ahh, the seemingly age-old debate between animal and plant protein. Both are viable sources for supporting lean muscle growth and essential bodily functions. However, there are definitely differences between the two.

Now, it’s no secret that animal-based protein contains a sufficient amount of all nine essential amino acids, which are the building blocks of protein. Therefore, it’s a complete protein source by default. A single plant-based source of protein, however, typically isn’t a complete source meaning it doesn’t contain a sufficient amount of all amino acids or it may be missing one or more. (1)

Although, you can easily fix this by consuming a variety of plant proteins. (2)

For example, rice and beans make for a complete source of protein. Other foods such as quinoa, soy, pita and hummus, and bread and peanut also provide a complete or nearly complete protein source.

Plant proteins may also contribute to longer life according to one recent review of studies published by the British Medical Journal.

A review of 32 studies found that a higher overall protein intake is linked to lower mortality rates for all causes. Now, total and animal protein wasn’t found to have a significant association with death from cardiovascular disease and cancer. But it was determined that there was an inverse dose-response association between plant-based protein and a decrease in all-cause mortality.

Plant protein intake is also known to have beneficial health effects on “cardiometabolic risk factors, including blood lipid and lipoprotein profiles, blood pressure, and glycaemic regulation” according to the scientific literature. This suggests an obvious connection with longevity.

Researchers also found a lower risk of all-cause death due to the additional 3% of energy from the plant-based protein per day.

It’s important to note that the review did conclude that more studies should be conducted as most of the included studies were done in Western nations and a few other countries. In addition, more research on the mechanisms by which protein may have an effect on health is needed.

But this is good evidence that suggests the general population can benefit from replacing a lot of animal proteins with plant-based protein sources.

You can still have your animal proteins

Now, that doesn’t at all mean you should drop the animal protein for good (but if you did then that’s totally fine). After all, animal proteins do contain higher amounts of amino acids such as sulfur amino acids or lysine and leucine, which is the most important BCAA (branched-chain amino acid) for promoting protein synthesis (where amino acids build proteins). (3)

According to research, animal protein it’s also better digested than plant proteins. All of these factors make animal protein more anabolic on average.

But again, we can combine plant-based protein sources, consume foods fortified with amino acids, or simply consume a combination of plant and animal proteins… and problem solved! Of course, you should be eating a variety of foods either way. Otherwise, you’ll need to be strategic with your choices. 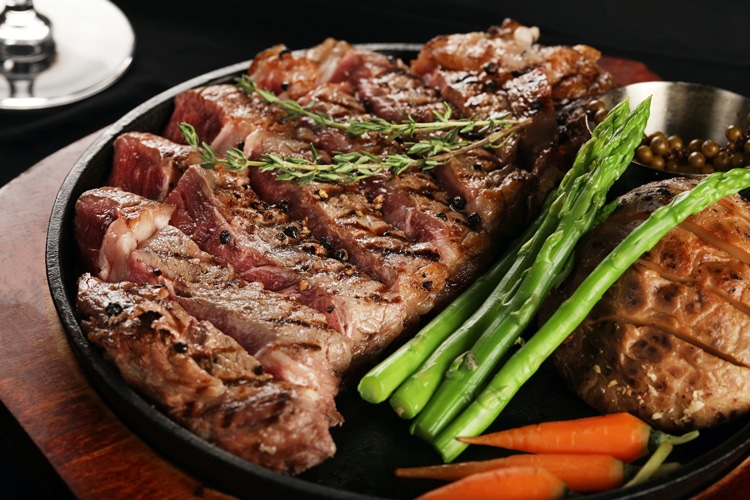 Another thing to mention about plant sources is that they do contain more fiber which is essential for optimal digestion and weight management, plus micronutrients that are vital for maintaining good health. But animal proteins also contain certain nutrients that are found in higher amounts such as B12, iron, and vitamin D.

We think it’s safe to say though, that if consuming animal proteins, do it in moderation and limit your “processed” red meats especially, which have been linked with heart disease, stroke, cancer, and even death. Unprocessed red meat hasn’t been linked with the same risks for disease and mortality. (4, 5, 6, 7, 8)

It’s also important to note that the same health risks of processed red meats have not been associated with other forms of meats either such as turkey, chicken, fish, plus low-fat dairy and even eggs. These foods have actually been linked with a lower risk of heart disease and stroke, plus improved cholesterol and weight management. (9, 10, 11, 12)

In fact, research shows that one to two servings of fish every week can reduce the risk of heart disease by 15%. As you probably know, fish and other marine sources contain essential Omega-3 fatty acids that are very important for maintaining good heart health. (13)

Many believe that plant-based nutrition is simply superior to animal nutrition overall. However, there’s sufficient evidence that suggests people who follow a plant-based only diet are generally much stricter about their nutritional choices and are typically more health-conscious.

In fact, one study found that when volunteers were classified as either vegans, vegetarians, semi-vegetarians, pesco-vegetarians, or omnivores, those following a vegan diet were more restrictive when compared to the omnivores. (14)

The study explained that those on a vegan diet “had the lowest total energy intake, better fat intake profile, lowest protein, and highest dietary fiber intake in contrast to the omnivorous diet“. This may explain a lot.

More research supports the notion that the overall dietary and lifestyle choices play a big role in the potential health implications of either plant or animal protein sources. (15, 16)

Not to mention, overall caloric intake may be an even more important factor when it comes to health risk and death according to studies. It appears the debate is definitely far from over…

While plant-based proteins should be a staple in your diet for its health benefits, animal proteins definitely have their place as well. A good mix is fine as long as you’re eating the right foods because just because a plant-based food contains protein, that doesn’t mean it’s necessarily good for you. On the other hand, eat meat in moderation and opt for higher-quality options.

Your overall lifestyle may likely play a bigger role in your health but you still always want to make healthy nutrition a large part of your daily regime to ensure optimal wellbeing and longevity.

Thank you for subscribing.

International Yoga Day: 6 tips for de-stressing the overthinker in you – News

admin - May 14, 2021 0
One of yoga's most widely recognized poses, Downward-Facing Dog Pose, called Adho Mukha Svanasana in Sanskrit, works to strengthen the core and...

Drive away pregnancy blues with yoga

admin - February 7, 2021 0
Yoga, for years, has been considered a safe and effective form of exercise for pregnant women. Just a few weeks before Anushka’s delivery,...

International Yoga Day: 6 tips for de-stressing the overthinker in you – News

admin - June 17, 2021 0
The mind loves to drift. It will either entertain itself with daydreams, anxiety about the future or rumination over the past. Sometimes,...

admin - June 17, 2021 0
Didn’t your parents always tell you when you were young to go outside in the sun and soak up some all-important vitamin D?...